Alerts for EC2 through CloudWatch

Monitoring your applications running on Amazon's EC2 platform just got easier. Today, Amazon announced the public availability of CloudWatch for EC2 with Alarms. Instead of having to poll and ask CloudWatch for the current status, you can actually have that information pushed to you instead. This is a much more efficient way to monitor you applications running in the Amazon cloud. Right now the only new alarm that is supported is for Amazon SNS, but this is a huge step forward. Before today, CloudWatch could still trigger an Auto Scaling policy, but with the addition of SNS the doors are really opening up. Using Amazon SNS, you can do almost any type of notification that you would like posting to HTTP/HTTPS, Email, JSON, or directly into SQS. This makes the service very flexible. You are able to monitor CPU Utilization, Average Disk Reads, Average Disk Writes and Network traffic in and out.
Amazon has also enabled a new monitoring tab in the EC2 management console that will allow you to look at the graphs for these elements on each of your EC2 instances. The data only goes back to the 2nd of December since it was just released today, but this will be extremely useful for a quick read on how your instances are performing. 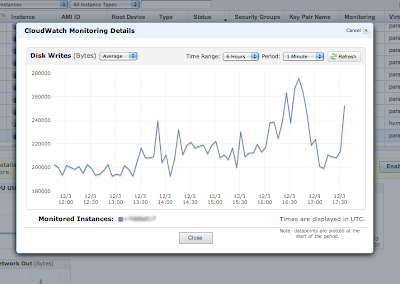 Amazon is certainly hitting things on my wishlist this year. Now if they would only enable CloudWatch and Alarms for metrics on SQS!  Hopefully this is just around the corner. You can read more about the new features and the pricing of CloudWatch on EC2 here.
Posted by Unknown at Friday, December 03, 2010 168 comments: